I love Star Wars. I've watched the original trilogy at least 50 times, but yesterday, I realized something new that I never noticed before.

I realized that the Luke, Leia, Han Solo and the Rebel army were able to bring down Darth Vader because of Empire's poor document management. Let's just say I was quite pumped to share my realization with you all.

Without a document management policy in place, corporations can put themselves at a grave security risk. Granted, Darth Vader may not be stomping around the halls at your work, putting people into choke holds, but companies' whose documents aren’t prepared for an audit might feel the vice-like grip of stress on them. That’s why I’ve derived a 4 document management best practices from the totally amazing, intergalactic adventure Star Wars:

Several Documents Were Beamed to This Ship by Rebel Spies.

“If this is a consular ship, where is the ambassador? — Commander, tear this ship apart until you’ve found those plans. And bring me the passengers, I want them alive!” – Darth Vader

All industries should retain a simple to use, secure and powerful online repository of all documents, including email. This is especially important for industries that need to meet rigorous compliance, regulation and reporting requirements.

The Empire had no such solution. At the beginning of ‘A New Hope’ misguided Ex-Jedi Knight, Darth Vader is choking the captain of a ship that is carrying Princess Leia, supposedly on a diplomatic mission to Alderaan. The truth is, she’s carrying very important plans for the Death Star, a mega-weapon created by the Empire.

Now, I’m not saying that the Empire should have triumphed, but if they had a document management system in place they’d have better control on what documents are going out and coming in to their organization. Darth Vader wouldn’t have to tear the ship apart looking for the plans because they would be safely and securely stored inside the Empire’s document management system and not taking a galactic tour of the universe in Rebel hands. In addition, Vader could have set restrictions on who could view the plans; even if there was a breach of some kind, Vader could get a list of individuals who had access to view the document and easily see who most recently handled the file.

Help me, Document Access Management. You’re My Only Hope

General Tagge: What of the Rebellion? If the Rebels have obtained a complete technical reading of this station, it is possible, however unlikely, they might find a weakness and exploit it.

Darth Vader: The plans you refer to will soon be back in our hands. 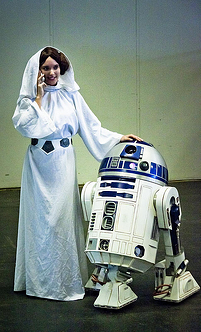 The Empire isn’t the only one who needs better access management controls on critical documents.

Leia sends R2D2 with an important message for Obi-Wan Kenobe, but not only does the message go astray, after a few wiggles of his screwdriver, Luke Skywalker (a person who at the time she didn’t even know) is able to free the message and view it. With a document management solution in place, only Obi-Wan Kenobe would have had access to a message addressed to him.

Companies that used a paper-based system of file management often run into similar problems. Though emails get a message or file gets to the person you want, companies that keep large amounts of hard files may find that sensitive files are misfiled or simply lost. Yes, Leia put her trust in R2D2 to deliver her important message, but what if it had fallen in the wrong hands?

These Aren’t the Documents You’re Looking For

For the healthcare industry, explanation of benefits processing can become a nightmare when not handled properly. EOB’s can be hundreds of pages long sometimes and the cost to print, file and maintain up-to-date information can cost enormous expenditure. When income is based on payment from insurance companies, healthcare providers can’t afford to misfile, lose or misplace an EOB.

Remember, how those poor weak-minded Stormtroopers in Star Wars were so easily convinced (visa vis the Force)? The droids that they were looking for were right in front of them! That little memory lapse cost the Empire quite a lot. As I recall, it cost them everything. Similarly, lost healthcare documents are a huge risk for healthcare providers since there are so many compliance issues surround the information shared through them. HIPAA protects patients from mismanagement of patient information. Healthcare facilities can get slapped with fines when they’re not fully compliant.

The Cloud is with You, Always

The Force is what gives a Jedi his power. It's an energy field created by all living things. It surrounds us and penetrates us. It binds the galaxy together. - Obi-Wan

When you save your work in the cloud, your work is always with you. In our plugged in, technology-driven world, you’re never too far away from a wi-fi connection. As more and more people choose to work remotely, the need for cloud-based document management solutions have increased. People need their files where they choose to work. They don’t want to choose to work near their files.

The Rebel Army is able to defeat the Empire because they have the ability to tap into a resource that is always with them – the Force. As Obi-Wan say, “It binds the galaxy together.” Your document management system should hold all your documents in one, central place that you can access wherever the power of good takes you.